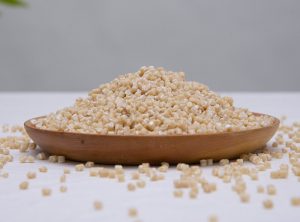 PLA and CPLA compostable plastic are the most common compostable plastics, often made from cornstarch with other vegetables which make them sustainable, compostable and renewable. CPLA is Crystallized PLA, meaning that it is heat resistant and useful for food service items such as cutlery, takeaway food containers, coffee cup lids and soup containers. It is not transparent but often seen as white unless charcoal is added to create a black color. PLA is used for cold food service items such as cups, salad containers, deli posts, lids, bags (such as trash bags) and clear windows in sandwich boxes or bags and is transparent. PLA and CPLA are also recognized as non-toxic which allows them to be utilized in medical environments such as medical implants, orthopedic devices and drug delivery systems.

What Is PLA Made Of?

PLA or Polylactic Acid is made typically from fermented food starch often from corn, sugarcane, sugar beet pulp or cassava and combined with lactic acid and cyclic di-ester lactide. Being made from organic materials results in a compostable, renewable, sustainable and ethical plastic product.

Contrary to thermoplastics (a lot of your typical plastics) which are petroleum-based, PLA is produced from raw materials. However, this doesn’t impact its main properties which are comparable to other plastics, making them a rapidly popular less impactful plastic for mindful consumers.

The materials fermented and used for the production of PLA are chosen as they are carbohydrate sources that are then manufactured in a controlled environment and have the starch extracted. This is then mixed with enzymes or acid and heated to break down the starch into dextrose or corn sugar.

What Are The Benefits Of PLA?

PLA has many benefits, including: non-toxic, compostable, renewable, sustainable, organic. Being manufactured from raw materials means that PLA can be composted either in a home composter or industrial composting facility and returned to its natural form.

The manufacturing process is overall more sustainable and environmentally friendly than that of traditional plastics as no toxic fumes are released, it uses 65 per cent less energy and 68 per cent fewer greenhouse gases (1).

The raw materials used are also sustainable, as crops can continue to grow and be replanted. PLA is also a thermoplastic meaning that it can be melted and reshaped safely, without degrading too much of its mechanical properties. This means that it is recyclable AND compostable.

The production of PLA also encourages job creation and rural area development. It has been estimated by European-bioplastics that by 2030 up to 300,000 jobs will be created in the European bio-market (2). PLA is also recognized as ‘safe’ by the United States Food and Drug Administration making it safe for food packaging and medical use.

You can read more about products made from PLA in our blog article discussing our new range of PLA compostable trash bags here.

What Are The Disadvantages Of PLA?

With all of its advantages, PLA does have several disadvantages which are likely not strong enough to stop people from choosing this alternative plastic as a safer option. PLA has a low glass transition temperature and can start to soften and deform at temperatures from 111’F. This means that PLA is less sturdy than other plastics and cannot handle the heat from items such as food or drink or sitting out in the sun or on a car dashboard.

PLA is NOT biodegradable, meaning that if it’s not disposed of correctly – in a home or industrial composting facility – it will take as long as conventional plastic to break down. It will also raise the acidity of its surroundings in any disposal method which can cause small issues.

Corn has also had some negative attention due to it often being modified genetically (GMO). Corn is so versatile that it’s used for many items from food and corn syrup to ethanol and feed for animals. The corn crop is not seen as environmentally friendly as traditional farming degrades soil and can lead to harmful runoff into streams and rivers. The pesticides and fertilizers used can impact aquatic ecosystems.

However, the benefits of using corn for items such PLA plastics still outweigh the benefits of traditional plastics which are petroleum/oil based and cause much more havoc for the environment both in the short and long term.

What Are The Benefits of CPLA?

CPLA of course shares many of the same benefits of PLA, being fundamentally the same, however, CPLA is able to withstand much higher temperatures than traditional PLA – up to 185’F. This makes it useful for hot items such as food, coffee and soups.

CPLA is also compostable in a home composter or industrial composting facility.

What Are The Disadvantages of CPLA?

CPLA is manufactured mostly in the same way as PLA, meaning that they have the same disadvantages from the organic material it’s made from to its impact on landfill should it not be disposed of appropriately. CPLA can withstand higher temperatures than PLA.

How Does PLA Compostable Plastic Compare To Traditional Plastic?

PLA plastic is a great alternative to other traditional plastics for many reasons as listed. These include being made from raw materials, making them sustainable, renewable and compostable. Their manufacturing process uses less energy, produces fewer greenhouse gas emissions and contributes to job growth in rural areas, whereas the same cannot be said for traditional plastic.

PLA plastic is also non-toxic and versatile, meaning it can be used in applications from food packaging and carry bags to cutlery and food service items. It is also certified to break down in an industrial composting facility in under six months.

Unfortunately, PLA is so similar in appearance and properties to traditional plastic such as PET that it can be mistaken by consumers as conventional plastic and overlooked or disposed of incorrectly. PLA cannot be used for hot items such as food or left in the heat, however CPLA can withstand higher temperatures.

If disposed of incorrectly, PLA will contribute to landfill or ocean concerns the same as traditional plastics. These products are also not able to be disposed of in your recycling bin.

What Other Types Of Compostable Plastics Are Available?

In addition to PLA and CPLA compostable plastic, there are several other compostable plastics available – some not as accessible or as low in price as PLA. These include the use of renewable or organic materials such as tapioca starch, soy protein, potato and cellulose. Cellulose nanofibers can be found in wood waste and also coffee grounds. Coffee grounds have most recently been used to make transparent coffee cups and straws. 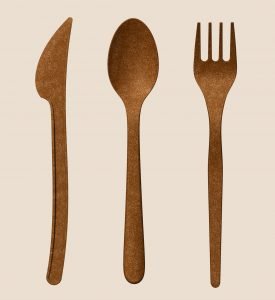 Compostable plastic can also be made from seaweed blended with the polysaccharides found in seeds such as avocado, jackfruit and durian. They can also be manufactured from algae or wastewater byproducts which contain polysaccharides (mainly starch-based, proteins and alternative carbon sources).

These latter materials aren’t yet as popular as cornstarch for various reasons such as their limited applications, more complex manufacturing process and lower availability.

Bioplastics that are compostable, such as PLA and CPLA compostable plastic, are growing in popularity due to their lower environmental footprint and increasing accessibility for consumers. Both are made mostly from cornstarch and other vegetable materials making them sustainable, compostable and renewable.

CPLA is mechanically the same PLA except that it has been crystallized, making it able to withstand higher temperatures and causing it to be white rather than transparent. Often charcoal can be added to CPLA to make it black in color. This doesn’t impact its ability to be composted.

Unfortunately, some consumers can confuse PLA for traditional plastic and dispose of it in the same way, making it contribute to landfill rather than breakdown rapidly in a home composter or industrial composting facility.

The manufacturing process for these bioplastics is environmentally friendly and a great alternative to traditional plastic manufacturing due to less energy usage, fewer greenhouse emissions and no toxic fumes.

The versatility of these materials make their applications broad, from food service items, food storage and trash bags to medical applications such as implants, drug delivery systems and orthopedic devices. CPLA can withstand higher heat, making it an ideal alternative to plastics such as polystyrene for coffee cups, soup containers and other hot items.

Both PLA and CPLA compostable plastic are non-toxic, meaning they are safe for the above applications. However, corn crops can cause some environmental concerns such as soil degradation and toxic runoff from the pesticides and fertilizers utilized. Best Bioplastic Alternatives On The Market How Long Does It Take For Plastic To Decompose?