As more and more people understand the existence of microplastics, more studies are being done to see where microplastics are and how they are getting so widespread.

Microplastics have been found in groundwater, often a source of drinking water, along with rivers, soils and oceans. Scientists are now starting to examine what human health impacts the presence of microplastics in waterways and groundwater may be.

Microplastics is a term used to describe very small pieces of plastic that end up in the environment – waterways, soil or rivers – resulting from incorrect disposal of waste or the breakdown of consumer products and industrial waste.

Microplastics are typically less than five millimeters long and can be harmful to marinelife, soil and other wildlife on land as they can choke or poison animals, or leave toxic residue in soil or water.

As they occur from other plastics breaking down, microplastics can be from cosmetics, synthetic clothing, plastics bags, bottles or containers. There are two types of microplastics: primary and secondary.

Primary microplastics are microbeads found in personal care products, plastic pellets or nuggets used in industrial manufacturing or packaging, and plastic fibres you may find in textiles such as nylon fabric.

Secondary microplastics are formed from the breakdown of larger plastics which happens when plastics are exposed to elements such as waves, wind or UV light.

How Do Microplastics Get Into Groundwater?

Firstly, groundwater is a primary water source and that’s important to note. Microplastics can end up in groundwater through several ways.

Research shows that one third of all plastic waste ends up in soils or freshwater which then disintegrate into microplastics and then nanoparticles which are less than 0.1 micrometre in size. Many of these microplastics also end up in sewage which can then be turned into fertilizer or recycled into drinking water.

When Did Microplastic Contamination In Groundwater Become A Major Concern?

In 2017, headlines across the world mentioned a study by scientists which found microplastic contamination in tap water in different countries. This prompted urgent research on the implications of health.

Essentially, tap water samples from more than a dozen nations were analyzed, with 83 per cent of samples found to be contaminated. The US had the highest contamination rate at 94 per cent.

What Could Microplastic Water Contamination Mean For Human Health?

Although research is still limited, there are several implications that microplastic contamination in groundwater could have on human health:

Can We Do Anything About This Problem?

Although it’s hard to completely eliminate your exposure to microplastics in water, there are a few things you could do to potentially protect yourself:

You can also reduce your own plastic waste by considering how you can stop using plastic and switch to alternatives in your life. This may be through purchasing fabric shopping bags, switching to compostable plastics and not using disposable containers, bottles, cups or cutlery.

Read more about plastic alternatives in this article. 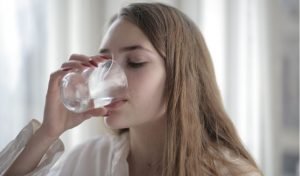 Microplastics have caused panic worldwide once they were found in drinking water, and although the impacts on human health are not yet known, there is no need to panic. There are many ways you can reduce your exposure to microplastics, starting at home with your own choices.

You can also be reassured that research is continuing in this space and data on health risks is still being collated although still limited. Groundwater can capture microplastics through disposal of plastics or smaller plastics into the environment such as soil or waterways.

Consider how you can reduce your own environmental footprint by reducing your use of plastics. Are Microplastics Inside Our Body Toxic? How is plastic contributing to air pollution?
PRESS ESC TO CLOSE